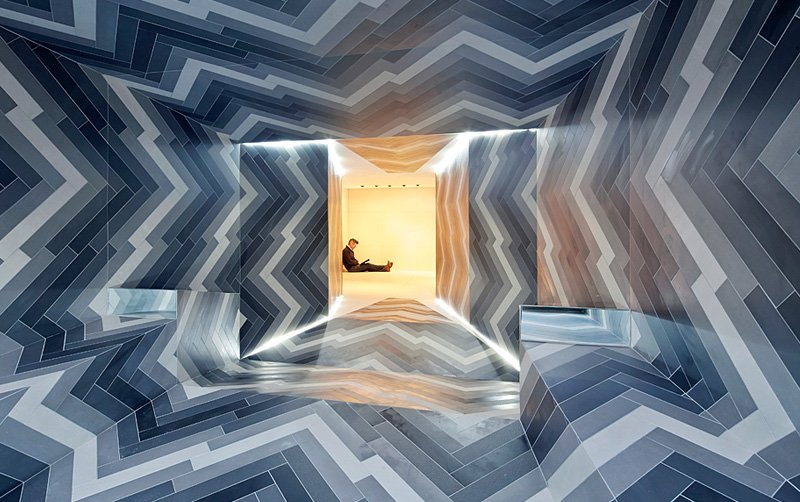 Capitol Designer Studio (CDS) has commissioned Lily Jencks and Nathanael Dorent to create a pop-up installation in Primrose Hill to show people just what’s possible using a porcelain tile. Mark Williams, London Sales Director at CDS said: “Lily Jencks is the most creative person I have ever met. Her understanding of space and form are truly enlightening. The SistemNtile is a beautiful, but very simple, understated product. I thought that if we put the two together, we could produce something unique.” He was right. In collaboration with fellow architect Nathanael Dorent, Lilyhas created an incredibly striking space. Lily explains that there are two ideas within the installation: “One is about perception - how you perceive distances and shapes; and make sense of space. The other is about how to display an object that’s for sale; we wanted the space to be more than just a showroom selling tiles; to rethink the commercial transaction as something more creative.” The first idea was inspired by Op Art and Gestalt psychology. Pulsate creates a sense of reinforced perspective and as a result will draw people into the space. Nathanael says: “We decided to use one system of tiles in one size and four colours. It’s just a simple herringbone pattern, but we’ve applied it in three dimensions, to create something really eye popping.” Lily adds: “What’s fun about the SistemN is the subtle range of colour. To get the really vivid exciting pattern, we go from dark to light to dark in a gradient, like a pulsating wave, which is where the name comes from.” And because the pattern and structure are so tightly interrelated, there is zerotolerance for error if the structure changed by even one millimetre, the pattern would not work. So they had to pay incredibly close attention to every detail to get it just right. The resulting space will be a ‘cultural hub.’ Nathanael says: “We had the idea of a shop not being only a functional space for consumption, but more about architecture and adventure. The floor is sloped, and benches are built into the structure, so you’re never really sure what you’re looking at. People can sit and have a discussion, lie on the slope, or view the product. We hope this will be a place where commerce will not only be about selling but about exchanging information. And nine months is long enough that things can really happen here.” Gianluca Rossi, Architect and Group Art Director, Marazzi said: “We are delighted with Lily and Nathanael’s design – it’s a fantastic creation, which we are honoured that SistemN was chosen for.” On Pinterest all the pictures and on Vimeo "the Pulsate Film"